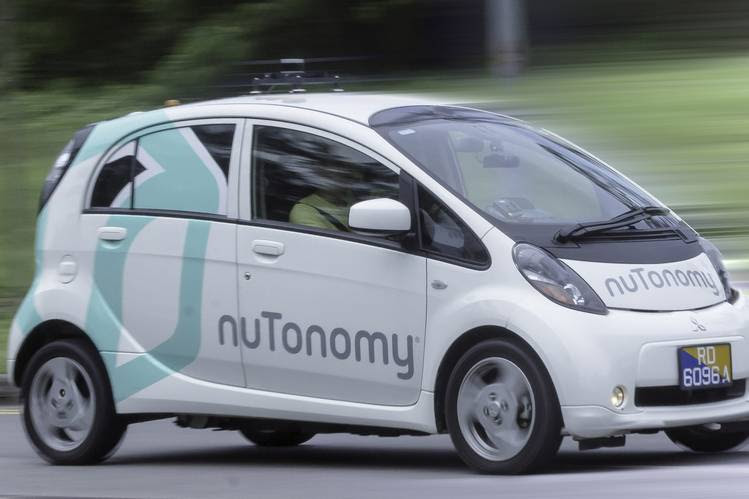 A Mitsubishi i-MiEV electric vehicle being tested by nuTonomy, one of several startups quietly working on building technologies for autonomous vehicles. Photo: nuTonomy

General Motors Co. ’s proposed purchase of tiny Cruise Automation Inc. for more than $1 billion would be one of the auto industry’s biggest Silicon Valley acquisitions to date. And it would certainly not be the last.

Auto makers and car-parts suppliers have hooked into tech startups in recent years to boost their in-vehicle connectivity and to accelerate autonomous-car development. The Bay Area already is dotted with auto-industry outposts funding or recruiting Silicon Valley engineering talent to keep pace with Alphabet Inc. ’s Google X and others working on self-driving cars.

Carol Reiley, president of Bay Area autonomous-driving startup Drive.ai, said her company, which like Cruise Automation and Zoox has been operating under the radar, just raised $12 million from venture-capital investors.

“The Cruise purchase is making VCs notice,” she said. Ms. Reiley added the GM deal could have a big impact on investments in autonomous-driving startups. 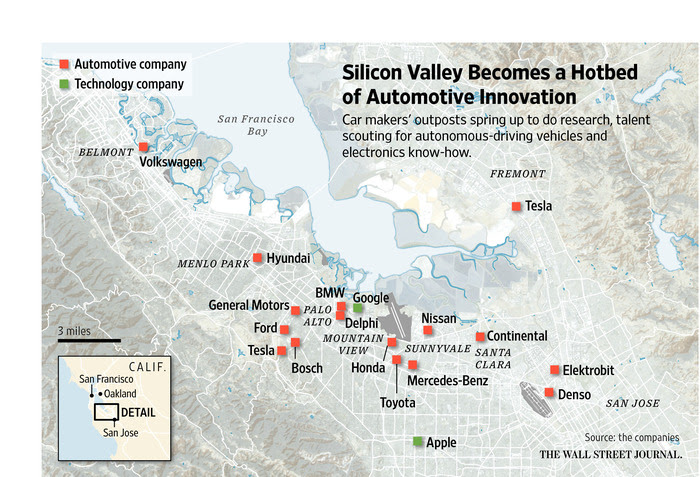 Auto companies “are racing to improve engine technology to satisfy government-mandated fuel standards and consumer demand for more connected vehicles with autonomous-driving capabilities,” the firm said in a report published in January.

IHS Automotive, which provides auto-industry data and forecasts, sees annual sales of self-driving or driverless cars reaching 21 million within 20 years. Self-driving vehicles can be piloted, while driverless ones have no driving controls.

“This whole autonomous-car transition, and the companies involved, is a space that is on fire,” said Mark Platshon, a senior investment adviser at BMW i-Ventures, a venture fund for German car maker BMW AG . “One billion dollars is cheap to make sure you are in the game,” he said.

Industry players looking to meet demand for autonomous-driving technologies may find plenty of potential targets to satisfy their needs. Among them: Zoox Inc., which has been building a robot taxi with a futuristic design; nuTonomy, which tells autonomous cars how to plan their motion; Nauto, which is building automotive networking and safety features; and Drive.ai, which is developing artificial intelligence to control autonomous cars.

Zoox, based in Palo Alto, Calif., is more cloistered than Cruise Automation; its website only has a button to send email to a generic mailbox. The company, said Mr. Platshon, is also further along on autonomous-vehicle technology than GM’s proposed purchase.

But it may not be in much of a hurry to sell. Zoox founder Tim Kentley-Klay, in response to a query, said: “Zoox was born to pioneer Level 4 mobility, not to sell out.” Level 4 autonomy refers to a car that can drive without a human in all situations.

If Zoox stays independent, there are other targets in Silicon Valley and elsewhere.

NuTonomy is a Massachusetts Institute of Technology spinoff working on software that tells autonomous cars how plan their motion through the environment. Recently, the firm received $3.6 million in funding from a handful of venture funds. It has been working an autonomous-vehicle pilot in Singapore.

Other startups such as Nauto and Drive.ai might get more interest from auto makers. “As some of the big guys look at how to build a high caliber of team quickly, some of them may explore purchases,” Mr. Platshon said.

GM hasn’t confirmed the $1 billion purchase price. But anywhere in that neighborhood, it would represent a hefty premium for Cruise Automation, a 40-person firm with no current products. Valued at about $90 million during a $20 million venture round about six months ago, the company had planned to sell technology that allowed Audi owners to retrofit those cars with driverless technology. But that plan was scrapped as its engineers turned their attention to something else­just what is undisclosed.

For $20,440, you can get a Honda today capable of driving itself in highway conditions. The WSJ’s Lee Hawkins takes a look at how Honda and companies like Chevrolet with its Cruze are innovating to improve driver safety. Photo: AP

Reilly Brennan, who leads Stanford University’s advanced auto program called Revs, said Cruise Automation has deep expertise in “computer vision” and may have found a groundbreaking way to analyze and use the huge volume of sensor information coming into an autonomous car.

“That is expertise that is frankly very hard to obtain,” he said. “The number of researchers in this area of vehicle automation is quite small.”

Sunny Dhillon, a partner at Signia Ventures Partners, which invested in Cruise Automation two years ago, said he backed the company after watching co-founder Kyle Vogt drive an Audi around a parking lot with a Sony PlayStation controller.

“I think we will see an increasingly acquisitive approach from many of the sleepier, established auto giants around the world, who have turned a relative blind eye to consequential technological innovation over the past decade,” Mr. Dhillon said.

‘The number of researchers in this area of vehicle automation is quite small.’

Last year, parts maker Delphi Automotive PLC made two significant investments. It acquired a stake in Quanergy, a competitor to Advanced Scientific that is developing a low-cost laser sensor, and it purchased Ottomatika, an autonomous-driving software company developed out of Carnegie Mellon University.